Later is a Social Media Management and Scheduling tool. I did a design challenge for one of their features over a 6 hour period.

I was assigned the Best Time To Post feature as the focus. The assignment provided me with the tools to understand the product, along with the user feedback needed to better understand see what needed improvement.

My first step was to create a Later account to better understand how Later works as a product. Having been a social media scheduler I used similar tools such as Hootsuite, Buffer and Hubspot. This didn't take too long, and with the briefing from the team, I was set to start pretty quickly.

What is the Best Time To Post (BTTP) feature?

Best Time To Post is a recommendation feature in Later. It recommends to users when they should post, this includes which day and time. Later bases these recommendations based on the performance previous social media posts. If it notices that the user's posts tend to do best on Mondays and Wednesdays at 2:00PM, it will recommend that the user post at those times regularly.

I shortened the feedback into the list below, to bring better focus to the issues.

I like to start out designing by writing and drawing things out by hand so I have something on paper to look at that's very easy to scribble over and leave notes around.
On the right side you can see three different solutions I came up with to solver user issues.

Users used to only see a clock button where the BTTP button is now. The clock button opens a modal to change your time settings. Users can now access that modal by clicking on the timezone to the left of the "Preview" button.

​The BTTP button is highlighted blue to bring attention to it, and will go become white once the user has clicked on it. The little bar under the BTTP button shows progress until the BTTP to post feature is turned on. 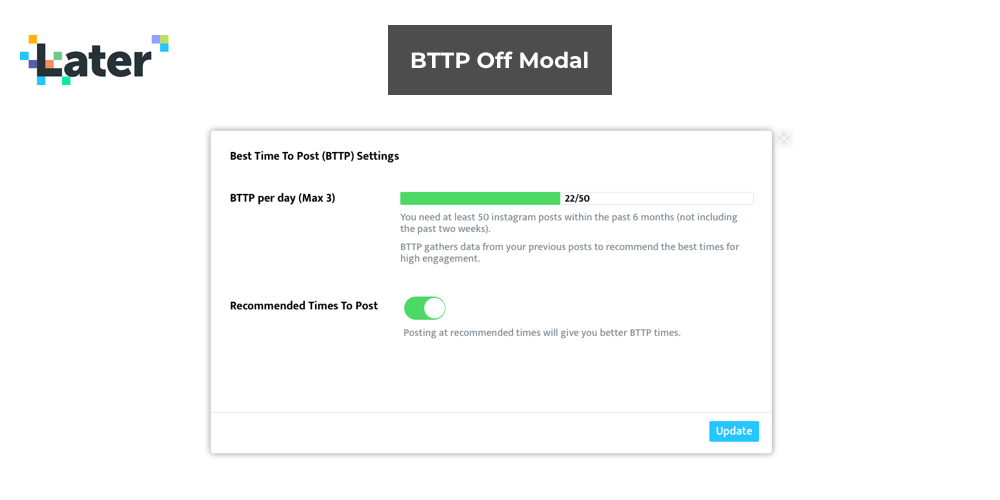 The BTTP button will open this modal. The modal currently shows that the user has posted 22 times and needs to post 50 for the feature to activate. This directly solves the problems of why the BTTP feature isn't on, and the details under the bar inform users about how the BTTP function works.

The Recommended Times to Post switch is a separate another feature suggestion that will be covered under Solution 3. 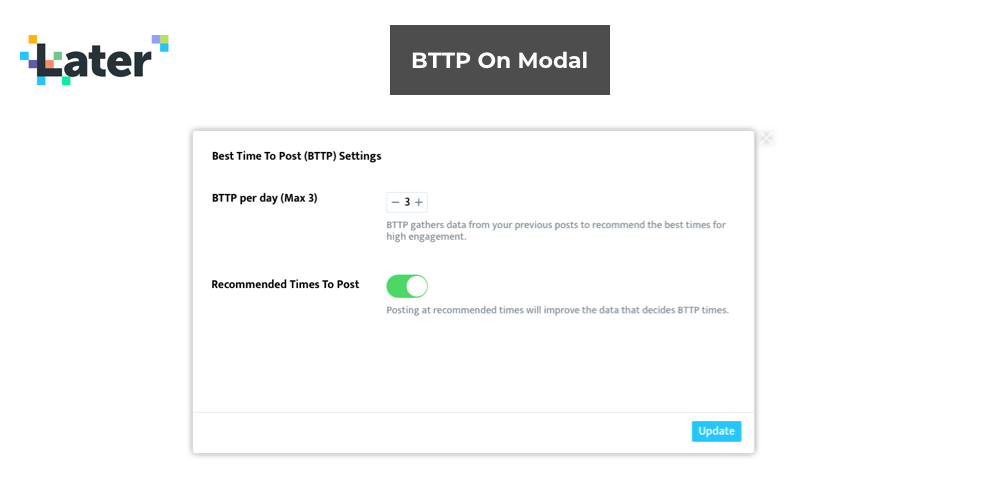 When users hit 50 posts, the modal changes. Now users can choose how many recommendations they would like to see per day. 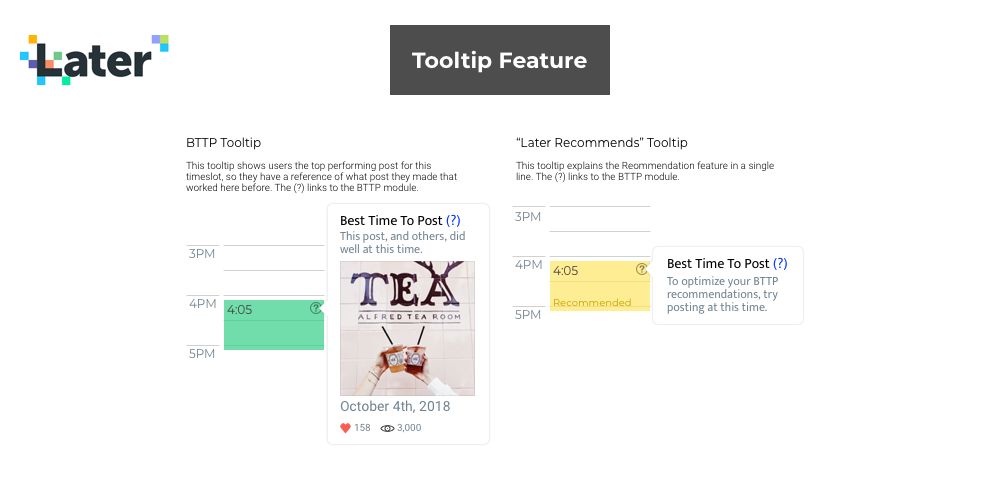 Users were confused as to how BTTPs were chosen. A tooltip showing high performing posts at each suggested time would help solve that problem.

The tooltip would also clarify what the Solution 3: Later Recommends feature does. 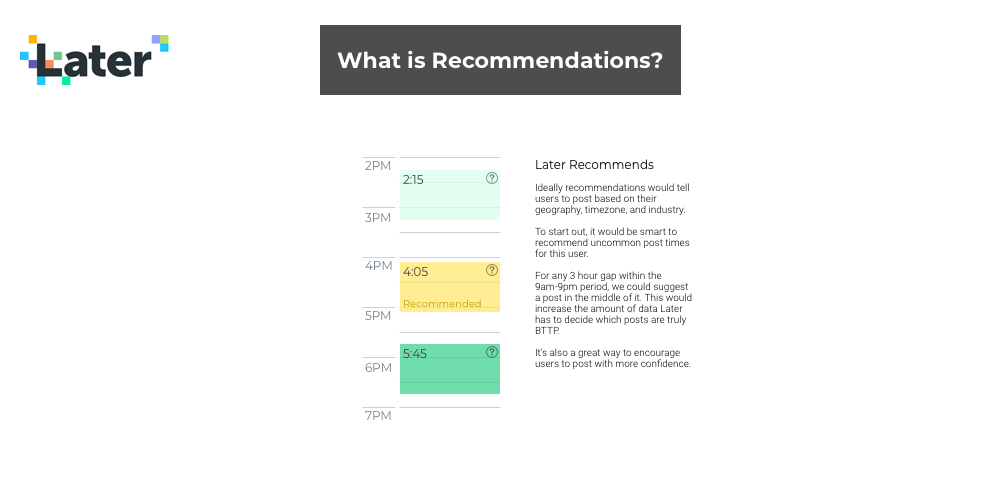 Later Recommends is a feature I suggested to improve the pre-existing Best Times To Post feature. This solution solves two issues. 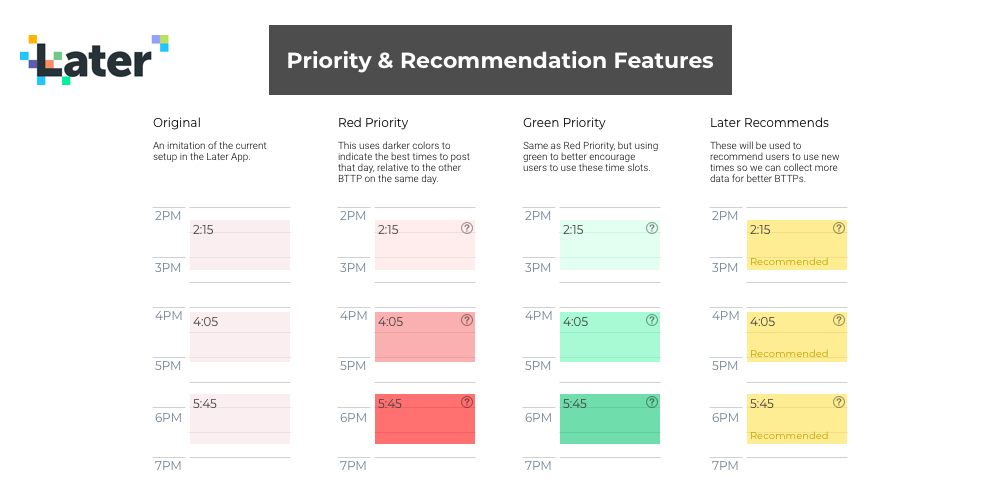 With several Best Times to Post per day, users were worried about not knowing which one would be the absolute best if they only have one post for that day. Using faded colours, Later can make it more obvious to the user which times are best to post on social media and can gain the most post engagement.

Separately, the Best Times To Post feature in its current state uses the colour Red to highlight the times. When I first saw that I thought "These must be terrible times to post, so I should avoid these time gaps." Turns out those are meant to be the optimal post times. I suggested that there be a change to the colour green since the red might scare people away.

This was one of my favourite design challenges. Though I didn't get the job, I learned a lot.

My biggest take away is don't do too much. Wanting to solve too many of the users problems made my solutions impractical within the time frame the development team would have had to push out the features. I did prioritize them to clarify which features I would start out with, but I wasn't able to draw a clear line and say no to myself in certain instances.

What I'm most proud of is the number of solutions I was able to get, and how well I fleshed them out within a very short time frame. Though I went over the allotted 2 hour period, I accomplished most of this work (outside of the presentation) within 6 hours. It meant a lot to me to be able to go through the entire design process, show it to professionals who know the product intimately and get their feedback.